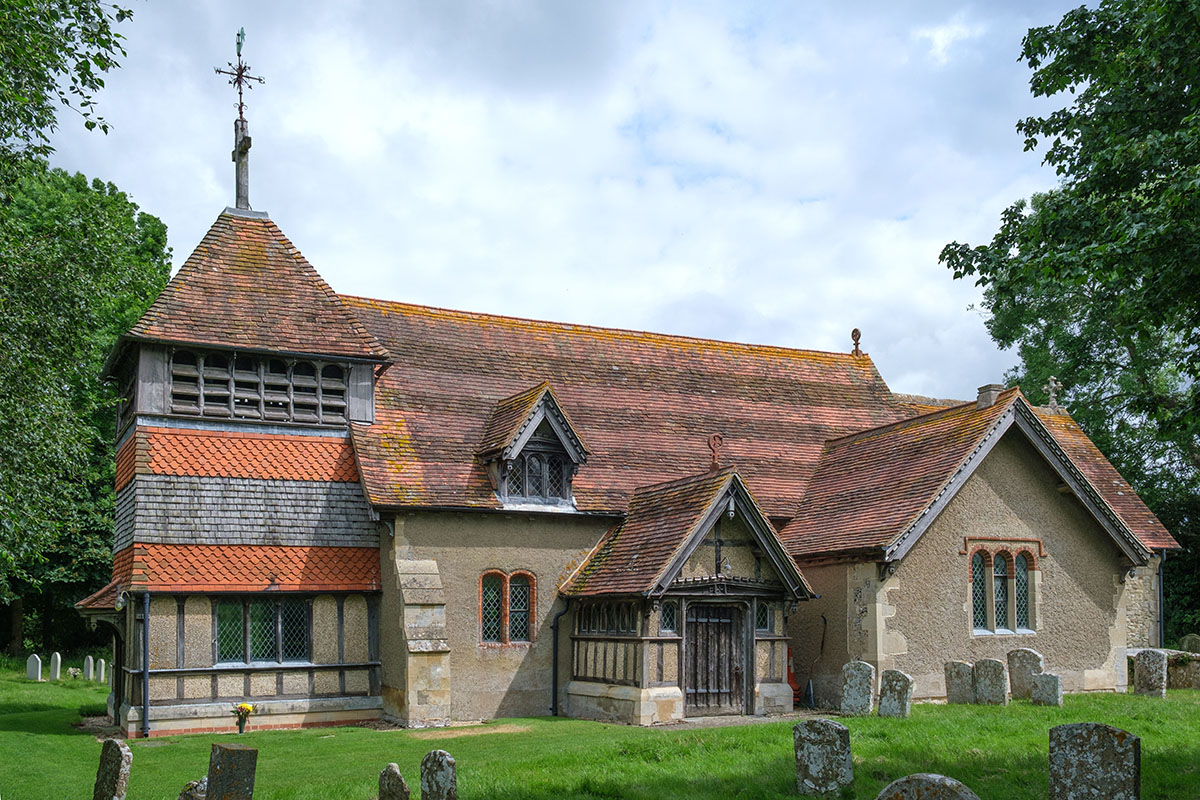 Malcolm Airs, OHCT Trustee,  was inspired by both these highly enjoyable books and invites the church lovers of Oxfordshire to seek them out to discover the anonymous craftsmanship of the seventeenth century interior at St Helen, Berrick Salome which motivated the ideals of so many Arts and Crafts architects.

In the introduction to his book published in April 2020, Alec Hamilton pointed out that ‘there has never been a book called Arts and Crafts Churches’. It is a measure of a renewed interest in the architecture of the late nineteenth and early twentieth century that by the end of that year there were no less than two books with that title. The term itself as a description of a particular movement is somewhat nebulous and both authors wrestle with the need to provide a definition. The key elements include the influence of the philosophy of Ruskin and Morris on social attitudes, the importance of the creative skills of the craftsmen who executed the works and an architectural reaction against the rigid application of medieval precedent which had driven the Gothic Revival of the previous generation. The key dates are the foundation of the Art Workers Guild as a forum for discussion between architects, craftsmen and designers in 1884 and the outbreak of World War I forty years later. Many of the churches were funded by individual benefactors rather than ecclesiastical bodies including a significant number of wealthy women. Their personal taste and patronage found a ready response from their chosen architects and craftsmen.

Hamilton’s book is written with a passion and enthusiasm that is unusual for study which began life as an academic dissertation. His introduction ends with a ringing exhortation for the reader to go and look at the churches for themselves. The seductive illustrations in both books make one hope that this will once again be possible as lockdown restrictions slowly ease. His introductory chapter is followed by three further chapters which provide a context with themes covering architecture as art, religion and society. The bulk of the text is a lengthy gazetteer which draws on a vast array of selected examples from England, Wales and Scotland. The gazetteer is interspersed with short essays on individual architects, benefactors and craftsmen. It is illustrated throughout with the author’s exceptional photographs in full colour and provides useful information for the visitor on access arrangements for each church.

Hamilton’s lively prose is embellished in places with some deliberately provocative statements whereas Button is more reticent. It is instructive to compare the descriptions of the same church in both books. The well-known church of All Saints, Brockhampton, Herefordshire, provides an excellent example of their contrasting styles. Button takes a broad thematic approach in his text with chapters on those churches which he considers were precursors of true Arts and Crafts churches, and others on remarkable women and the impetus provided by new towns and villages. His gazetteer is confined to an appendix. He covers a wider time-span than Hamilton and helpfully provides an exterior illustration of nearly every church that he describes, As far as Oxfordshire is concerned, Hamilton has an excellent essay on Oxford college chapels with entries on Mansfield, Harris Manchester, Pusey House, Blackfriars and Campion Hall but both of them draw attention to the noticeable lack of examples in the rural parishes of the county. This must be partly due to the active promotion of High church ritual in the region which ensured that most churches had already been restored earlier in the nineteenth century according to Gothic Revival principles before the Arts and Crafts movement had taken effect. An important exception is the delightful church of St John the Baptist at Curbridge near Witney which is rightly given a full account in both books.

Inevitably, there are some churches which have escaped the attention of both authors. Hamilton encourages his readers to ‘find churches I didn’t find or even think of’ and in that spirit, I would commend the comparatively minor example of the north aisle St Peter, Marsh Baldon, remodelled in 1890 with its distinctive colour scheme of deep red pews and green roof timbers. Even more extraordinary is the exterior of St Helen, Berrick Salome, restored in the same year.  Nicholas Pevsner in 1974 condemned it as ‘a hideous application of all the trappings of fashionable late C19 domestic architecture to a church’. It would be a pertinent question to ask Simon Bradley when he gives the Blenheim lecture on 13 October whether this judgment will remain in the second edition of Pevsner when it is published in the near future. In the meantime, inspired by both these highly enjoyable books, one can only urge the church lovers of Oxfordshire to seek it out and make up their own minds and, incidentally, to discover the anonymous craftsmanship of the seventeenth century interior which motivated the ideals of so many Arts and Crafts architects.