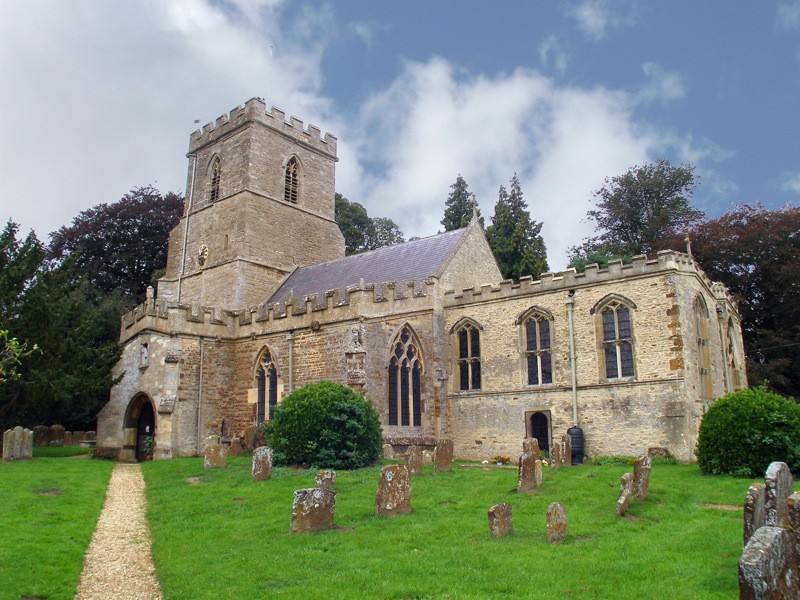 Both visits followed the same route from St Mary, Kidlington, to St Mary, North Aston, taking in St Nicholas, Tackley, and St Peter and St Paul, Steeple Aston. At Kidlington, we were able to see how a 13th century church had been enriched with Decorated windows in the 14th century and we also admired the 15th century wooden screens enclosing the chancel on three sides and the medieval glass from different parts of the building collected in the east window. At Tackley, a church on a steep site, we found a narrow Saxon nave, flanked by an Early English south arcade, and a chancel with three narrow lancet windows; the south transept has a neo-classical monument to John Morton, Chief Justice of Chester, with a figure of Justice in high relief.

After lunch at the Red Lion, Steeple Aston, we were greeted at Steeple Aston church by the Rector, the Rev. Marcus Green, who also has Tackley and North Aston in his charge. The Lady Chapel at Steeple Aston is dominated by a huge marble group of the judge, Sir Francis Page, owner of the Middle Aston estate, and his second wife, commissioned at her death in 1730. We admired the quality and realism of the carving, but found the expression of Sir Francis somewhat intimidating. Quite different was the serene late-15th century alabaster monument at North Aston, possibly of John Anne and his wife, which is a generic portrayal of a late-medieval noble couple. By the time we reached St Mary, North Aston, the weather on both days had improved and on 12 May it allowed a group photograph outside the south side of the church.

Annual Meeting of the Trust OHCT during the pandemic – updates from the chair Annual Review 2020 Guidance on care for stained glass Newsletter to Members from the Chairman June 2020 Latest grants awarded to Oxfordshire churches Events for 2020 Newsletter to Members from the Chairman National Churches Trust survey and grants Diocese officer’s Spanish steps for trust
This website uses cookies to improve your experience. We'll assume you're ok with this, but you can opt-out if you wish.Accept Read More
Privacy & Cookies Policy